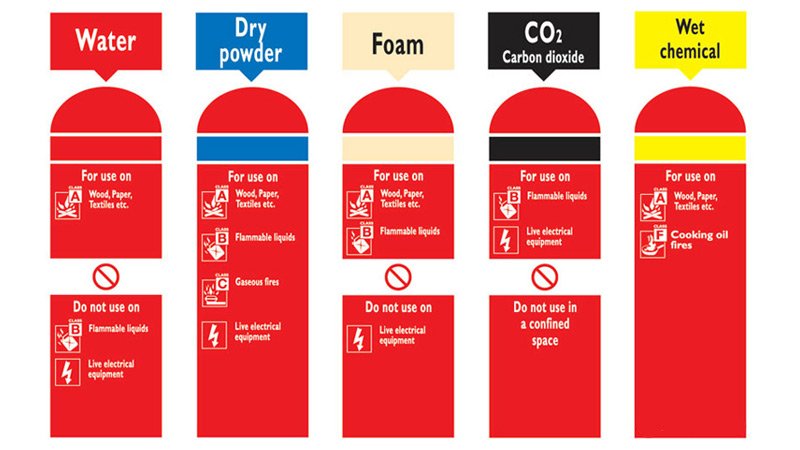 When used properly, a portable fire extinguisher can save lives and property by putting out a small fire or controlling it until the fire department arrives. Portable extinguishers, intended for the home, are not designed to fight large or spreading fires. However, even against small fires, they are useful only under certain conditions:

Choose your extinguisher carefully. A fire extinguisher should bear the seal of an independent testing laboratory. It should also be labeled as to the type of fire it is intended to extinguish.

The extinguisher must be large enough to put out the fire. Most portable extinguishers discharge completely in as few as eight seconds.

Class A: Ordinary combustibles such as wood, cloth, paper, rubber, and many plastics.

Many household fire extinguishers are “multipurpose” A-B-C models, labeled for use on all three classes of fire. If you are ever faced with a Class A fire, and you don’t have an extinguisher with an “A” symbol, don’t hesitate to use one with the “B:C” symbols.

Warning: It is dangerous to use water or an extinguisher labeled only for Class A fires on a grease or electrical fire.

Extinguishers should be installed in plain view above the reach of children near an escape route and away from stoves and heating appliances.

Extinguishers require routine care. Read your operator’s manual and ask your dealer how your extinguisher should be inspected and serviced. Rechargeable models must be serviced after every use. Disposable fire extinguishers can be used only once; they must be replaced after one use. Following manufacturer’s instructions, check the pressure in your extinguishers once a month.
Remember The Pass Word

Stand 6 to 8 feet away from the fire and follow the four-step PASS procedure. If the fire does not begin to go out immediately, leave the area at once. Always be sure the fire department inspects the fire site.

PULL the pin out: This unlocks the operating lever and allows you to discharge the extinguisher. Some extinguishers have other devices that prevent inadvertent operation.

AIM low: Point the extinguisher nozzle (or hose) at the base of the fire.

SQUEEZE the lever below the handle: This discharges the extinguishing agent. Releasing the lever will stop the discharge. Some extinguishers have a button that you press.

SWEEP from side to side: Moving carefully toward the fire, keep the extinguisher aimed at the base of the fire and sweep back and forth until the flames appear to be out. Watch the fire area. If the fire re-ignites, repeat the process.
Should You Fight The Fire?

Before you begin to fight a fire:

It is dangerous to fight a fire under any other circumstances. Instead, leave immediately and close off the doors and windows if possible.